The trail building school (nor. Stibyggerskole), in which I took part in last weekend (10-11th of September), will definitely stay in my memory for a very long time. And there are many reason for that: soreness would be one thing, few blisters another. But the main reason rendering Stibyggerskole memorable is the fact that it truly was an awesome and very inspiring experience. 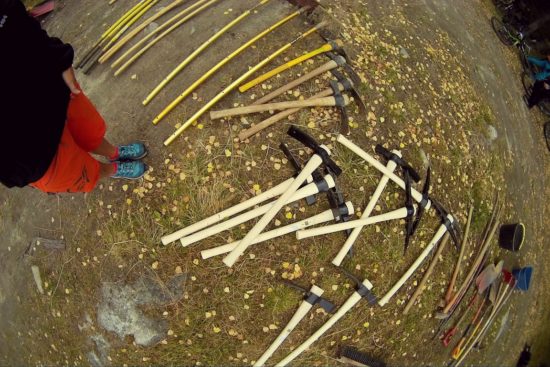 The event was organized by Tråkk‚n’Roll i Opplysningskontoret for Terrengsykling together with IMBA Europe and NOTS, and the training was run by Mark McClure, Gary Hampson and Duane Butcher. And what can I say: it all went just splendidly.

We began on Saturday with the theoretical introduction. Despite the early morning hour (some had come a long way to Nesbyen), it was a pleasure to listen to the lectures that Mark and Gary gave. We learned a lot about some general rules of how trails should be built, as well as planned and maintained. Special importance was given to using local materials (stones, stones, stones, stones everywhere), and we’ve also got some tips on how to deal with muddy terrain and marshlands, both very common in Norway.

After our lectures, traditional Norwegian pizza was served (that’s always puzzling 😉 ). Ready to go and pumped up with energy, we packed into the shuttle buses and hit the mountains. Lots of tools (so nicely presented in the photo above), were taken along, as well as our bikes. We quickly discussed how to use them (tools, not bikes), assessed which should be taken along, and grabbed whatever took our fancies. The pickaxe – my choice of the day – made me so proud at the very beginning, but very tired at the end of the day.

Most of you have probably heard about the trails we were repairing, many might have even ridden there. Nesbyen Enduro (p.99 in Stisykling i Norge), is not a particularly new trail. Many wooden constructions built there years ago have now rotten and become… unsafe, to say at least. I tried to walk on those sketchy bridges, hanged meters above the ground, and soon regretted my decision: not only were the staves extremely slippery (and it wasn’t even raining yet), but also placed in an “on a budget” kind of way, such that my feet could easily fit between them. 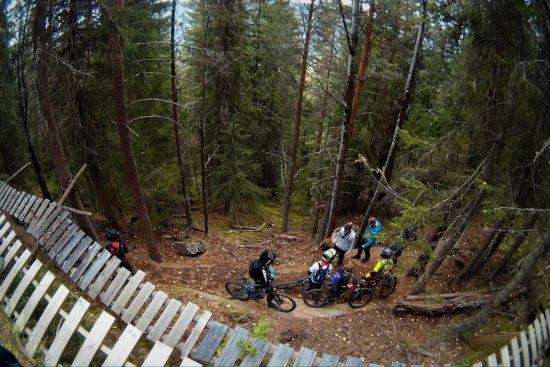 Our field sessions began with assessing the trail condition. We also learned how to use the clino and measure grade. However, the most important part, was the process of building itself. Each of us had chosen tiny part of the newly planned trail to work on, and the fun part began. 🙂 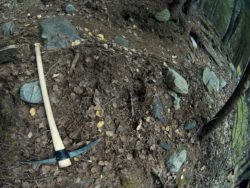 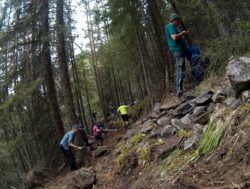 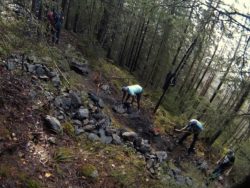 The work was quite tough, I have to admit, and didn’t go too quickly either, but it was extremely rewarding. After a while, the pickaxe, which I was so proud of having, became heavier, as did the stones. At one point, I started to think “well, it’s an <<arm day>> then”, but suddenly, 3 hours had just passed, and we were to begin biking. As a result, during our grill party in the evening, I wasn’t really sure which muscle group hurt me more.

The next morning, we met equally early, and without further ado began to work. Another few hours later, our team of over 30 people had finished, I guess, around 40 meters of trail. It’s hard to say if it’s a lot or just a little, but that wasn’t the point. While building, we acquired some essential skills, familiarized ourselves with trail building techniques and learned how to deal with some issues that would never have come up, if we only were to have theoretical classes. Thanks to this hands-on experience, I’ve also understood how seemingly unimportant details can affect the final result of the work. 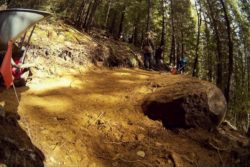 Stibyggerskole didn’t leave me empty-handed – I got a certificate and some stickers (they knew how to buy me). But most importantly, they filled my head with lots of knowledge and ideas. Thanks for an amazing weekend guys!

Please, have a watch of the video below.